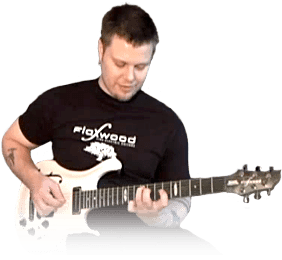 Richard Lundmark is a 30-something guitar equilibrist, heralding from the deep forests of Northern Sweden. His style ranges from rock to jazz, from metal to fusion and something in between.

Richard has both released a critically acclaimed instrumental album, (FretDance, 2003), and held popular guitar clinics and workshops in several countries, Sweden and Japan to name a few. He is currently
working on a full-length guitar instructional DVD entitled Electric Guitar Concepts.

Some excerpts from comments and reviews about Richard’s music:

Greg Howe: “Very accurate and passionate bends/vibrato. Great technique overall – Tone is very clean and appealing – Great use of altered or “alternative to the obvious” scales – Phrases are very confident, accurate, and musical”

Brett Garsed: “I checked out your songs and have to say that it’s just great playing and writing mate! Really big tone too.”

Young Guitar, Japan (Clinic review): “… Devout guitar lovers united to see the playing-demonstrations and questions and answers where alternated between songs. The participants were from beginning to end overwhelmed by the actual playing, and the combination of questions and a very high level lecture was transcending.”

XA-metal, Japan (Clinic review): “I went to see Richard Lundmark’s guitar clinic, a guitarist from Sweden that is well known amongst guitar freaks around the world. He has also released a guitar instrumental album, FRETDANCE. The content of the clinic was aimed for middle to advanced level players (little bit hard for beginners). The improvisation playing was really awesome and the place was filled with excitement!”

Sweden Rock Magazine (Album review): “Richard is a phenomenal guitarist with a good grasp of both technique and feel. He has a nice tone and a cool style.”

Other info: Richard also holds a Master’s degree in International Business Management, and has worked as both a consultant and Barista. Among his interests are reading, movies (give him anything fantasy oriented and he’s a happy camper), training (should be doing a lot more of that actually), as well as spending time with friends and family.

Musical influences: These days, Richard rarely finds his inspiration in guitar music, but rather from rhythm and groove-oriented music such as Hip-hop, R&B and Funk. But back in the day, some of the founding fathers of his playing where the likes of Nuno Bettencourt, Blues Saraceno, Allan Holdsworth and Joe Satriani. He is a big fan of Guthrie Govan’s playing as well (then again, who isn’t).

Finally, Richard’s personal vision statement is: “To leave a legacy of inspiration and excellence behind”, which is something that will guide all his guitar lessons here at InfiniteGuitar.com.